COWS SHOULD BE BANNED 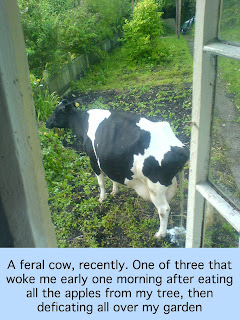 Cows emit some 100 million tons of hydrocarbon yearly - by releasing gas. Otherwise known as methane, it is a potent greenhouse gas and puts the cow up there with cars, as one of the planets biggest contributors of harmful emissions.

Perhaps the Prime Minister could lead the way in combating Global warming, by banning cows?


Below are some remarkable facts about cows that you could bring up during your next dinner party:

* The average lifespan of a cow is 7 years. The oldest cow ever recorded was Big Bertha. She reached 48 in 1993. She also holds the record for producing 39 calves.

* Although a cow has no upper front teeth, it grazes up to 8 hours a day, taking in about 45 kg (100 lb) of feed and the equivalent of a bath tub full of water.

* A cow has four stomachs: the rumen, reticulum, omasum and abomasum. The rumen is the largest stomach and acts as a fermentation chamber. The abomasum is last of the four and is comparable in both structure and function to the human stomach.

* With all its grazing and many stomachs, it is no wonder that cows are one of the main contributors to the hole in the ozone layer. Apart from CFC, the biggest culprit is hydrocarbon emissions from cars and cows. Yes, cows! Cows release some 100 million tons of hydrocarbon annually - by releasing gas. To give you an idea of how much gas a cow emits: if the gas of 10 cows could be captured, it would provide heating for a small house for a year. But unlike what you think, cows release hydrocarbon mostly by burping.

* A cow emits a large amount of methane gas in a single day; 95% of this methane is produced through belching, not flatulence [5]. As methane is a potent greenhouse gas (23 times as warming as carbon dioxide), research is underway on dietary supplements that can reduce these releases.[6

* A single cow emits enough gas in a single day to fill 500 litre bottles
Posted by Jestlazz at 17:23