DOORMAN HITS OUT AT SMOKERS 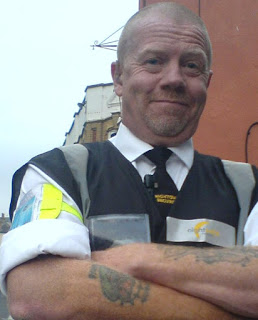 Now that smoking in bars is unlawful, we find ourselves having to endure small pockets of proletarian types bonding on pavements and obstructing pub doorways. Asphalt, already defiled with gum and gob are now strewn with fag butts while across our towns and cities, huge mushroom clouds of cigarette smoke swell skywards from pub car-parks.

Before the ban, smokers integrated and socialised with non-smokers not dissimilar to a cheap whiskey diluted with cola resulting in a palatable taste. Now, smokers group together like feral gangs and include pregnant girls wearing stained vests and clutching alcopops. They huddle unsheltered from the elements like king penguins. Clutching lighters, their eyes narrow as they suck, then blow, plumes of smoke into doormen's faces as their non-smoking partners sit alone and abandoned inside.

Should a dirty, socially unacceptable and life threatening habit retain a code of ethics? If you're a smoker, and you arrange to take a person who didn't smoke - out on a date, would you then, during the course of the evening, dare to be so disrespectful and rude as to leave that woman or man alone in a bar or a restaurant while you stood outside and smoked a cigarette? Why would you expect the very same person who graciously accepted your invitation for an evening out, to accept being abandoned as you leave them to stand outside for ten minutes to do something they have always found revolting?

If then, people must boast the necessity to continue to smoke, why can't they learn to light up whilst utilising if they have any, just a little bit of self-respect? Perhaps smoking etiquette should be introduced into the school curriculum where children could be taught how to smoke with dignity, as Carey Grant did the 1957 film, An Affair to Remember.