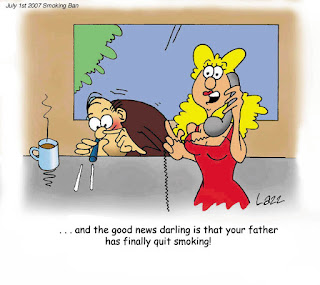 I suspect the cliché ‘Laws are made to be broken’ was originally penned in jest. Today though, it has become a philosophy by which I live.

For as long as our aged and out of touch ministers continue to lay down upon us new silly directives, then I shall continue to live my life as I have always done, by getting away in life, with what I can.

While gluttonous MPs polish Commons Bar chesterfield leather with their backsides whilst running up huge bar tabs on whisky and cigarettes I shall carry on flouting laws of which I deem, to be petty. Evidently, our glorious leaders will continue to enjoy a fag with their malt in any of Parliament's bars because the building is classified as a Royal Palace which makes it exempt from the smoking ban. That's handy then.

By stealth and incredible prestidigitation, our lives in this once great country are now more manipulated than we have ever seen before, yet apathetically and blindly, the masses cower and turn away.

Thankfully, contrary to belief in Westminster, legislation can only change how we feel or what we believe in - if we let it. And as long as we still have this freedom of choice and before the day arrives of mind altering machines such as in Arnold Shwartzenegger’s 1986 film Total Recall, then we still possess the opportunity to change society. Unfortunately, we are a nation of spineless sheep with apathy running through our veins and a dignity that died with Churchill.

One day a Brickie will be laying blocks, perched on scaffolding 100ft above a building site with a rollie hanging from the corner of his mouth. Four streets away, Robocop, having been tipped off by a community support officer of Polish extraction, will be taking aim with a laser sight, planting a red dot on the brickie’s head. Then deliberately, with a squeeze of the trigger, sustained fire from a high velocity shoulder mounted machine gun will blow the young mans face off sending the rollie, still lit, falling to the ground below.