THY SHALT NOT GET CAUGHT COMMITTING ADULTERY 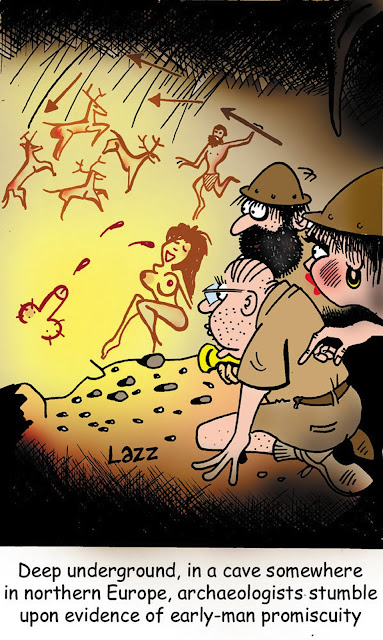 The chain of wedlock is so heavy it takes two to carry it, sometimes three.
Alexandre Dumas 1803-1870


I was still reeling from the shock of seeing a bearded, middle aged man, wearing a T-shirt that read, 'I eat pussy like fat kids eat cake', when I was informed by a customer that odd noises could be heard coming from inside the ladies toilets.

A couple aged in their late 20's and in a state of undress, were having sex in one of the cubicles. So, after pressing my ear against the door for a short while, I waited until their rhythmic thrusting reached a crescendo then banged hard on the door telling them to stop what they were doing and kindly leave the premises.

Now normally, this kind of conduct isn't too uncommon in some of pubs, particularly at weekends, but what made this particular incident require more than the usual suspension of disbelief, was because while the man made a rather embarrassed and hasty exit from the pub, the woman walked brazenly back into the bar area and calmly sat down . . . next to her husband.

Now at the time, I felt sorry for him because he looked a decent sort of chap, and it occurred to me that the last thing he needed right now was to be humiliated in a pub full of drunken people, so on this occasion, I decided not to pursue the matter any further. However my conscience later nagged me for not telling him what his wife had been up to.

But let's be honest, it can only be a matter of time before her appetite for impromptu sex romps with strangers betrays her, if it hasn’t already, and when it does, I hope the poor bloke finds out discreetly as a result of his own subtle suspicions, rather than seeing dodgy photos of his wife on facebook or reading another man’s crude exposé along with his wife’s mobile number scrawled on the toilet wall at his place of work.

And so whether or not the husband found out exactly what happened that day, I'm afraid I cannot tell you because I don’t know and anyway, it makes no difference to the point I am trying to make, so let me cut straight to the chase.

The fact is, in these modern times, while love still embodies loyalty, commitment and red roses, Lust on the other hand is interested only in satisfying it’s own deviant urges and habitually achieves this rather skillfully by guile.

In all my years working in the hospitality sector either as a pub landlord and more recently as a doorman, I have encountered extra marital sex on such an astonishing and unbelievable scale that I have sadly come to feel and with good reason too, that the probability of absolute true loyalty and dependability existing in any relationship, surely is about as likely as a giraffe balloon sculpture winning next years Turner Prize.

We’re told that the most common reasons for infidelity given by straying spouses are sexual frustration, curiosity, boredom and revenge, with the third person usually turning out to be either a friend, associate or somebody we know.

Personally, I suspect that for every one person careless enough to be caught cheating behind a partners back, there are probably another five or so interactions carrying on who's participants are simply far too cunning and devious ever to be found out.

Such is the power of lust that precedes an affair and the immeasurable devastation generated by exposure, the absolute genius and brilliance of subterfuge employed in the pursuit of deceiving a loved one, is unparalleled to that of a close up magician who with unfailing sangfroid can deal a royal flush from a shuffled deck of cards.

Our pair bonding ritual used to take place over a period of weeks or even months when genuine courtship was about respect, chivalry and doorstep kisses. But today, a man and a woman who have never before set eyes on each other can strike up a conversation during happy hour and by the time last orders have been called, their brief courtship has already been consummated over a stack of rattling beer crates in the back yard with a post-coital cigarette smoked together out on the front pavement. It gives a totally new meaning to the term speed dating.

Unfortunately however, it's human nature to want more than one sexual partner, especially after so many years of living together. It's a survival trait in all of us allowing us to replace either the hunter-gatherer or the child bearer, lost by a sudden death. It's this default genetic program that helps sustain the ongoing survival of our species.

In fact Stamford University did a study which showed physical chemistry has a shelf life today of just nineteen months showing that society forces 'happily ever after' on us when biologically we're programmed to cope with multiple partners. You can't fight nature.

And if you read Professor Jared Diamond's book, Why is Sex Fun? It explains the link between promiscuity, natural selection and concealed ovulation. He teaches us how evolutionary forces have shaped our sexuality and how concealed ovulation and sexual receptivity in women today, make possible our unique combination of marriage, co-parenting and adulterous temptation. Albeit, we are a long way from perfection but then isn’t that precisely what evolution is all about?

Anthropologists suggest that recreational sex is supposed to be the glue that bonds a couple together while they cooperate in raising children, but as we all know even the strongest glue weakens under too much pressure.

When you consider that the 2010 mid year statistics for PaternityLab.co.uk revealed that 1 in 3 DNA tests carried out by them proved negative. In other words - 34.55% of men tested (those who had reason to) were found not to be the biological father. Perhaps then it's only logical that paternity home kits have finally become available to buy over the counter in Boots.

To put things into perspective then, let’s get one thing straight - we are not robots that can be controlled by encoded robotic programming. We are flesh, blood and bone human beings, created by a miracle of nature and graced with feelings and emotions that determine our very own unique and exclusive psyche, ultimately administered and maintained by the awesome power of our brains.

Inside each of our brains there are 100 billion neuron cells that are responsible for sending out signals. And, each one of these 100 billion cells connect independently to another 25 thousand cells, constantly processing information in ever changing relationships. And with all these cells working together, our brains have so far evolved with the capability of making more connections than there are atoms in the entire universe.

Because of this, each and every one of us is unique among all the people who have ever lived on earth. In fact scientists propose that we each have a virtually limitless array of complex emotions that dictate what someone feels at any given time, depending on the thinking experience and memory of the individual. And for this reason alone, no two people can ever be ‘made for each other’ as we like to believe.

Our unique minds are so extraordinarily unpredictable, unexplored and mysteriously deep. To understand exactly how it functions and controls each and every thing we do, would be like claiming to comprehend and understand every single thing there is to know about our entire solar system.

I’m not saying that every person in a relationship has been cheated on. That would be a ridiculous statement to make! I’m merely saying that no matter how strong sexual relations are between a couple in a relationship, if other aspects of mutual interest and compatibility that binds two people together are put in jeopardy then on average, most relationships will not sustain much longer than about two years at the most without one or the other falling out of love through boredom, frustration, curiosity or revenge.

Even the mightiest monumental architectural structure can be bought down by subsidence that starts with a tiny crack.

When a link in the chain of love that joins two people together, becomes weakened by say, too much time apart, a failure in communication or maybe just another volatile domestic argument, then consider the following; when you take into consideration the complexities of the emotional switchboard inside our brain, that part of us that controls our fear, love, pain, hate, anger, elation, greed, envy, shame and lust, to name just a few, and then interact these emotions with other powerful forces such as anger, memory, temptation, curiosity, jealousy and motivation etc. All that’s needed then are some powerful external influences such as alcohol, drugs, companionship, pheromones and sexual imagery. Then just stand back and see what happens.

I reckon that even way back in the Jurassic period, cohabiting cave-couples got bored with each other and on occasions, played away from home. With no recreational activities to partake in other than drawing animal doodles on cave walls and with conversation limited to nothing but endless meaningless grunts, presumably then, sex was the only other way of passing time with your partner and understandably became rather dull and repetitive.


So please forgive me for being presumptuous, in my closing paragraph, but I can't help wondering how many hard working cave-men returned home from hunting unexpectedly early one day, due to say - an injury sustained after wrestling with a mammoth, only to walk in and find their women having sex with the good looking neanderthal who lives in the cave down the road?