A LETTER TO THE COLONEL 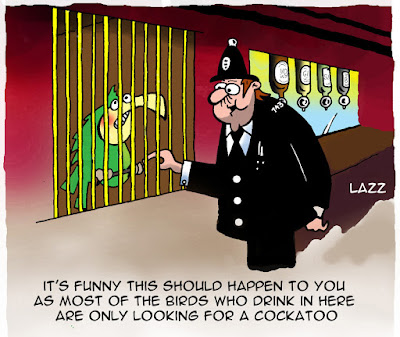 Seldom does the conduct of a man who has consumed too much alcohol appease my sense of humour. Bar watching him struggle to maintain his balance as he staggers out of a takeaway, listing over into a steep tilt then slamming down hard onto the asphalt before feral seagulls swiftly close in to brutally snatch the spoils of his cheesy chips in a macabre feeding frenzy. As a general rule, I find most drunks either boring or crass.

Having said that, as a former Royal Marine myself, serving with both 45 and 40 Commando Units, it is always a pleasure when trained ranks and recruits from Lympstone visit Torquay and come into the harbourside pub where I work as a part time doorman, because the anticipation of not knowing what might happen makes an otherwise regular night just that slightly more, shall we say, interesting.

For example, when I worked on the doors in Taunton a few years ago, I remember clearly a concerned manager asking me to deal with a group of marines who had opened several dozen hot mustard sachets and smeared the entire contents over their genitals in a bizarre kind of contest.

Another time when I was working in Plymouth, I had to physically stop a marine from eating a potted plant that was located on the bar counter just next to the till, frightening the bar staff.

Unfortunately, most civilian managers and staff who work in Britain’s pubs and clubs today do not either understand or share the unique blend of satire and wit that bootnecks past or present are well renowned for.

Because in a more recent incident requiring more than the usual suspension of disbelief prompting me to write you this letter, I was left with no alternative but to ask a group of marine recruits to leave the premises when one of them stood upon a chair, unzipped his jeans and shoved his cock into the pub parrot's cage nearly sending poor Jack who has lived there happily for the last two years into a state of cardiac arrest.

And whilst I personally was able to refrain 'too obviously' from grinning, other members of staff were less able to contain their disgust and viewed this young man’s behaviour as a deliberate act of deviant perversion against a defenceless bird. The pub’s owner later informed me that Jack was quite emotionally traumatised by this event along also with many of the pub’s customers, who happened to be watching at the time.

Perhaps though, what makes this incident particularly more poignant, especially for those who know Jack well, is that in his zest for repartee, forging new friendships using his staggering vocabulary of words, I suspect this will be one story in Jack’s life, that he will not be heard repeating.

As an ex-marine, I get no pleasure whatsoever when the owner of a pub or club asks me to eject a marine from their premises, particularly for reasons that usually always amount to nothing more than a jolly good jape, and consequently I always find myself arguing in favour of the accused. It is for this reason that I insist on always wearing my Commando Dagger tie pin so that it may be recognised by any serving rank who happens to walk through the door thus sanctioning an almost instantaneous mutual social bond based entirely on my understanding of the Royal Marine psyche.

In my capacity then as a marine friendly night-club bouncer, perhaps you will kindly permit me to enclose with this letter a printed directive entitled ‘6 Points to consider when on a run-ashore in Torquay’ offering some excellent advice to all those recruits who are planning to paint the town red so that a complete pub blanket ban can be avoided. This was very nearly the case in Exeter and I would be very dismayed to see this happen in Torquay.


Thanking you kindly sir, for your time and consideration.