Most people, if caught unexpectedly in a sudden downpour of rain, would make a hasty dash seeking shelter in a nearby doorway or at the very least quicken their walking pace. 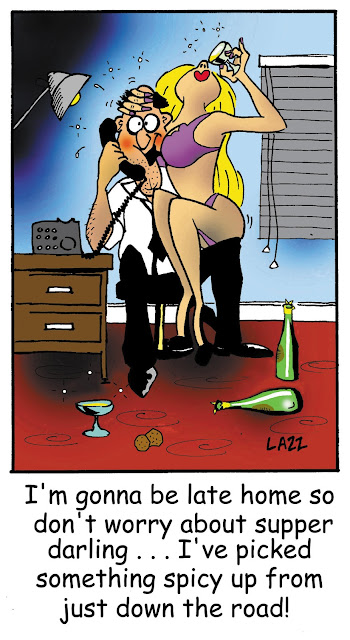 But then other people like myself, would not, favouring a good soaking through to the skin in a defiant act of pig-headed stubbornness and obstinacy, intended to show Zeus - the powerful rain god who evidently presides over the mixing decks controlling global weather that actually, rainwater doesn’t particularly bother me. Consequently, some might refer to me as being a man, contrary by nature.

Although I suppose it doesn’t exactly help either that I subscribe to the ideology of ‘resistentialism’; a jocular theory to describe seemingly spiteful and perverse behaviour manifested by a hostile army of inanimate objects deliberately causing us distress or even harm. The slogan of resistentialism is 'Les choses sont contre nous' meaning 'Things are against us'.

Examples of this include rogue wheels on supermarket shopping trolleys that suddenly steer off the wrong way crashing you into shop fittings. Tea cups or glasses that deliberately miss your mouth spilling a drink down the front of your clean pressed shirt. Teaspoon/sock migration and those particularly mischievous invisible last steps on a flight of stairs that launch you into an unplanned clumsy somersault through a busy restaurant or bar and of course, how can we possibly forget . . . outlaw biscuits. The feral digestive kind that purposely break off plopping into your scolding hot tea mid dunk, necessitating a rescue bid that normally entails thrusting your hand in to retrieve it before it sinks, thereafter causing the flesh on your forefinger and thumb to slowly die, peeling away from the bone.

I guess we all have our own weird little ways of responding or conforming to certain cultural conditions and stipulations. But I believe it is precisely these principles and beliefs that we are prepared to die for, even if others close to us regard them to be too radical or ridiculously futile, that shape our very own unique personas providing us with our very own individual identities.

My own personal catalogue of oddities and quirks include codes of practice that don’t allow me to wear any clothes that deliberately exhibit the manufacturer’s label, brand name or any other pointless logos. Neither do I subscribe to the supermarket 'buy one get one free' mind games, making a petulant display of throwing the 'free' six pack of tomatoes back at the cashier.

Another relatively misunderstood eccentricity of mine is not allowing our cultural traditions to dictate what food and drink I should consume at certain times of the year. For example, if on Christmas day I decide for dinner I want fish-pie with chips and peas then I'll bloody well have fish-pie with chips and peas, or chilli for that matter. Likewise, don't presume I'm going to want to celebrate my birthday with a glass of bubbly because actually, I might just prefer a nice cup of splosh instead. In other words, just because I intermittently play along in life's game and occassionaly baa like a sheep (only when it's absolutely essential of course) - it doesn't necessarily mean I'm going to eat grass like one.

Anyway, I have no desire to burden you with all of my peculiarities - not now anyway, suffice to say there is always good reasoning behind my apparent madness.

Although interestingly however it's worth noting that perhaps one of the main common denominating factors underlining my own personal process of rationalising certain things in life is the ideology known as 'counter intuitive economics'. This general presumption that tells us the more money we pay for something, then the better quality or better service we are getting in return, and this of course is absolute bollocks; It nothing more than our pride, our arrogance and our conceit that makes us think this way.

Take champagne for example. That much revered pompous brand that generally implies achievement, winning, status . . . and of course money. As an ex company manager for Whitbread Inns, I learned well of the cons and scam inside the drinks industry and champagne ranks high up there amongst the big boys as one of, if not the biggest, brand cons in all of history.

Champagne is without any doubt whatsoever just another stage prop that is all too commonly employed as a fashion accessory. A reality that is exploited by unscrupulous club owners all over the country, who can easily, and do, charge £80 - £100 and upwards for a bottle that will cost you just £20 in a supermarket.

Firstly, can I say that most of the men, and it's definitely a man thing, who I have observed over the years buying champagne in the pole dancing club where I used to work, almost seemed to believe that the very act of making such an opulent purchase would almost underwrite any requirement for any sartorial style or personal grooming.

It's interesting how so many men for whatever reason are able to rebuff the hard-sell hype of haute couture, continuing to dress in outrageously scruffy and un-ironed clothes, but then allow themselves to be controlled by their own narcissism allowing the societal ambience of a strip joint seduce them into charging their debit cards incredible amounts of money on nothing more than a sparkling wine with a designer brand name on the bottle.

Perhaps then, some men subliminally act on the notion that the only way they can get the attention that they feel they deserve from women, is to pay ridiculous amounts of money solely for the privilege of loudly firing a cork across a crowded bar and that hopefully, this will accrue them a certain enamour bordering on that of a celebrity. Seeking if you like, elitism by proxy.

People who do this, and believe me they are everywhere, are subscribing to the very same philosophy of counter intuitive economics that works so effectively in other industries. It's a powerful ideology driving the wheels of commerce. The more we pay for something, the better it makes us feel and ultimately we hope, the better we look to others.


Unfortunately in the club where I worked, I guess sensibilities and rationalisation was often swept away in a tidal wave of tits and bums because for the same money men paid for just a single bottle of champagne, they could have purchased a half decent blow-job from a street girl followed by a portion of cheesy chips, a taxi home and still had enough change left over for the kids school dinner money the following day.


I wonder how many champagne drinkers are aware that back in 2008, due to the world wide demand for Champagne, France's Champagne Authority made a decision to extend the Champagne region to cover a further 38 vineyards bringing the total to a staggering 357 in an apparent effort to produce more sparkling liquid gold. Consequently the owners of those 38 vineyards who unlike before, were now suddenly legally entitled to brand their produce ‘Champagne’ as opposed to just a sparkling wine, then discovered that the value of their land overnight increased from five thousand euros per hectare to a staggering one million!


This is no different in concept to the current twenty two appointed members who govern the Dartmoor National Park Authority in the county of Devon, southern England, suddenly deciding to extend the boundary of the National Park in response to an influx in tourism. That being the case, a three bedroom house in need of modernisation that was once located outside the national park and worth say, one hundred and fifty thousand pounds - but now finds itself situated inside the national park, an area much sought after, is now suddenly worth another hundred grand more. The problem of course is that there is no shortage of clowns around today who are prepared to pay the what people ask.


I don't know about you but personally, champagne has never really been my thing getting me all excited like it does other people and I have never, ever, been so naïve as to believe that buying a bottle would impress a girl enough for her to take me back to her place (a few lagers was always enough). Instead, I've always rather regarded champagne no differently than I would a pedigree dog wearing a diamond stud collar living in a grand country house and a pub dog from a slum estate who eats pork scratching, farts and enjoys a good tussle with the customers. At the end of the day they're both dogs who do the same thing; bark, bite, sniff, scratch, gnaw bones and lick their balls. While sparkling wine, quite honestly, is equally no different than an expensive bottle of champagne. It just doesn't come with a pedigree.
Posted by Jestlazz at 21:33