A CHOCOLATE TOO FAR

It’s occurred to me that I can’t recall meeting anybody, ever, who actually likes coffee crème flavored chocolates. I mean, why would anybody? And this surprises me when you consider we’re living in a coffee culture where it’s considered cool to patronize places like Starbucks or Costa Coffee and to be seen drinking over-priced lattes, espressos or café mile from a designer branded polystyrene takeaway cup. 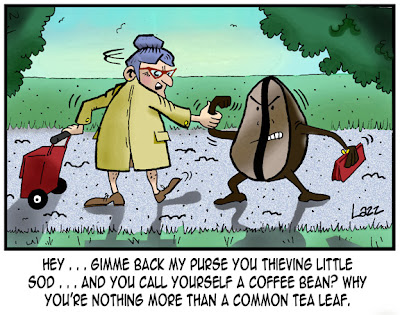 Now personally, I enjoy most things edible that are associated with chocolate as do surely most people; biscuits, ice cream, sponge cake, chocolate eggs, a cup of hot chocolate or breakfast cereal coco pops etc, but like most things in life there are exceptions to the rule and in this case - it’s coffee. Coffee and chocolate go together like jelly and baked beans, or even cauliflower and cheese for that matter.

I recall my first coffee crème experience many years ago just before I’d reached puberty when I’d feigned illness to stay home from school and secretly dipped into a hidden tin of Christmas sweets. My palate responded poorly leaving a deep wound that changed fundamental regions of my psyche, ranking high up there with all those other disconcerting childhood memories involving things like brussel sprouts, your first cigarette or even being gang wedgied in the school playground and it is often these early year experiences and traumas that are responsible for our actions later on in life.  Consequently to this very day, just the sight of tinned chocolates especially around December, revives memories of rotten fruit.

Now I find myself re-opening this debate after I was recently offered a chocolate revel and I inadvertently ate a coffee one that was disguised as an orange crème. Stomach convulsions ensued almost immediately and I started retching vehemently making that unpleasant KAAAHHKKK noise that dogs make when they’ve eaten grass and then get a bit stuck in their throat.

Furthermore, I feel that to be given a coffee crème purposely, is to be insulted and tantamount to a snub. Coffee cremes are outlaws living in an otherwise conventional chocolate society. Non team players, un-loved and universally despised.

So I can’t help wondering why the makers of chocolate confectionery still bother to use them despite the fact they were dumped by confectionary giants Cadburys Roses and Nestle’s Quality Streets a long time ago presumably on the advice of a chocolate think-tank.

My wife, if she read this, would probably imply that I’m spewing out more nonsense and remind me to keep on taking my prescribed pills while keep seeing my therapist weekly. It’s all about freedom of choice, she’d say, to respect other peoples rights and freedoms to be individual and yes . . . to some extent I do agree, providing of course the welfare and lives of other people isn’t compromised. Naturally we have to respect other people's rights and freedoms to be individual, but what kind of life form eats cold solid coffee substance covered in chocolate?

Personally, I believe this whole chocolate-coffee thing is a deliberate and shrewd marketing ploy based on the same principles of psychology that makes gambling and other forms of extreme sports and risk taking so addictive. The enjoyment derives from the power of suspense from not knowing exactly for sure how things are going to turn out. It’s like picking the short straw or being blackballed at a Masonic lodge.  Maybe one day, legislation will be introduced either ending or controlling this vindictive practice. But now I feel I am perhaps dipping my toes too deep into the murky waters of chocolate politics, a subject matter one should be cautious to whom they discuss with, through fear of not being taken seriously, mocked or labeled a buffoon.