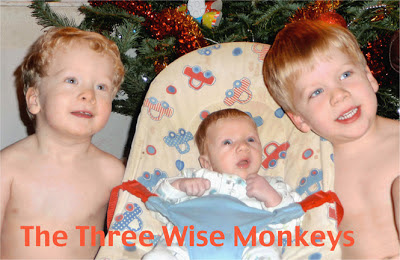 When you mix together each of the diverse sounds of say, a crying baby, an unsecured washing machine on an outrageously fast spin with the clanking of empty wine bottles left on top, a turned up television, a badly tuned kitchen radio playing gangsta rap, toddlers screaming and the irritating drone of character speaking battery operated toys such as Buzz Lightyear, Bob the builder or Lightning McQueen – then you end up with a combined sound not dissimilar to ‘white noise’ that normally accompanies long periods of forced sleep deprivation used to break the spirit of prisoners in places like Guantanamo Bay.

Add then, being inadvertently punched in the bollocks, having brussel sprouts bounced off your head from across the dinner table and continually having to belly-crawl commando style along that narrow space between the skirting board and the back of the sofa then around the Christmas tree, searching for the missing TV remote control - and this will give you some idea how Christmas was for me this year.

I didn’t once leave my house to see any friends. I didn’t get to watch any television whatsoever and I didn’t even manage to get down to the pub. Why so, you ask? Well . . . I guess it’s because when you have a wife twenty and a bit years younger than yourself and three sons aged three and a half, two and a half and two months, the general principles of orderliness and control through time management turn out to be about as much use as a set of carrying handles on a main battle tank and you are left with unpredictability, disorder and total unconditional chaos.

On Boxing Day morning however, during a rare moment when there were no children clinging to me and I’d finished washing the dishes, doing the ironing and hoovering up etc, I did manage to seize the opportunity and answer a call on my mobile from a good friend. So, I took the added precaution of shutting myself outside my back door where I believed I’d be safe, only to be discovered by son number two who got his head wedged in the cat flap as he tried to climb through and I was forced to hang up the phone mid conversation.

Despite all of this –  the important thing was that my three boys, Oscar, Rueben and Ellis had a simply wonderful time and no amount of money in the world could persuade me to part with the memory I now have of the looks on their faces on Christmas Day morning.

I can’t help wondering however, if perhaps next year will be a little easier on me? Or will I be spending the entire festive period leaning against the kitchen wall in the stress position wearing an orange boiler suit, listening to white noise while waiting to change the nappy on a fourth newborn baby?
Posted by Jestlazz at 15:54