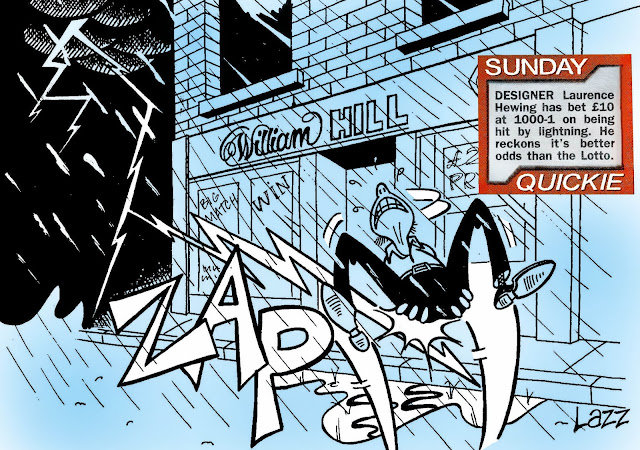 Quite some time ago I was shown being interviewed on Sky News because I’d just made a bet with high street bookmaker William Hill claiming that I would be struck by lightning before I ever won the lottery. They accepted my bet and if this ever happens and I survive, I’ll collect ten grand.

Yet despite recent heavy thunder storms I never even came close. However, I recon if I was to come back in my next life as a cow, it would be a completely different ball game. I'll wager that if you select any cow at random from any field then the odds are it could tell you a story, or knew a cow that could, about a cow friend or a relative from a different herd, that was killed by lightning.

Any dairy farmer will tell you the same thing that it would not be considered strange or unusual in any way, if, following a heavy thunderstorm, a head-count revealed a cow deficit. With almost constant life-long exposure to the elements, overall body mass surface area and their not so clever concept of safety in numbers by everyone bunching together under the same tree, it only requires a single bolt of lightning to wipe out any number of cows in a single strike, leaving the farmer presumably to just write them off as spoiled goods like a shop-keeper might do if he came across a packet of broken biscuits during an audit.

No chance then of my bet being accepted had I been a cow and presumably I suppose I’d be wasting my time shopping around for a long term life cover plan with benefits. Because even if I did tick all the right boxes to most of the questions put to me by the insurance underwriter – when it got to the one where he said ‘when grazing, where would you usually go to seek refuge and shelter during an unexpected thunderstorm? If I replied ‘under a tree’, I think he’ll just make his excuses and leave.

Further questions would inevitably raise issues pertaining to the high methane content that cows are known to produce with implications directly related to an incident reported last year in the UK when a coach full of foreign tourists supposedly witnessed a cow suddenly burst into flames and explode.

I hope that any of you who read this, won't misinterpret my ramblings and presume that I have some kind of twisted issue with cows, because in actual fact I empathise and have a great fondness with cows believing them to be underrated and misunderstood.

I just can’t help it when every time the meteorological office issue a warning forecasting heavy rain and thunder, there's always  a tiny-weeny bit of me that wishes I could become a cow just for a few hours, because I genuinely believe it would improve my chance of being struck with a bolt of lightning and winning the ten thousand pounds. The only bit that scares is not being able to change back into me again and remaining as a cow for the rest of my life.

Collecting my winnings and enjoying the money of course, is wholly dependent on whether or not I become one of the two thousand or so people who are killed globally by lightning each year. This necessitates my coming into contact with lightning for an astonishingly and inconceivable brief duration, just short enough for me to sustain no more than superficial burns with standard blistering and scattered areas of melted body hair - but not long enough that the soles on my shoes start smoking.

It’s estimated that the Earth’s surface is struck by lightning around 100 times a second or over 8 million times each day, so the actual real odds of anyone of us getting struck is around 1 in 600,000. Compare this to the absurd odds of winning the lottery jackpot at 1 in 14,000,000 and you can maybe understand my reasoning but also understand quite clearly why William Hill limited my bet to no more than £10 at 1000 to 1. It took William Hill a several days to consider the mathematical probabilities before getting back to me and accepting my proposal.

This subject does naturally pop up during conversation now and again creating some interest and the response is always usually the same starting with perhaps disbelief and then amusement, generally then followed by a few wise cracks or silly remarks with implications that I’m probably some kind of crank. But more commonly what people always end up asking is what made me bother to go ahead and proceed to actually make the bet when the general rule is that a daft idea is by its very nature destined to go no further.

I remember I got exactly the same reaction when I once painted the entire exterior of my house in tangerine orange colour paint and people called me barmy. Then again when a newspaper printed a letter I had wrote condemning the high expectations of today’s youth and suggesting that Santa Clause be killed off in a freak accident . . . I was labelled then by some readers as a complete crackpot and so you can imagine the response from my customers when I had a pub in London some years ago and I woke up one morning and discovered a crop circle shaven into the back of my head . . . so there’s no point wasting more time going into the specifics of every other time I’ve been labelled a fruit-cake and the reasons why, because it would just simply take me too long.

But I do wonder how it's possible that there can be so many people out there apparently devoid of any sense of fun whatsoever and are so quick to label others as complete idiots or completely off their rockers?

Are people for some unknown reason losing their primary sense of fun, imagination and recklessness that they surely must have had and used during their childhood, leaving their lives as bland and as colourless as the magnolia coloured paint throughout their homes?

I recall when you could look into the minds of others and see all the colours of an English summer garden but so very often today all you find is an empty backyard with perhaps if you’re very lucky, a hanging basket. Those memorable moments when just the exchange of a few simple words with a complete stranger during an unexpected fleeting encounter could leave you almost invigorated and in an odd sort of way feeling rather good about yourself, have become somewhat infrequent.

That same magical and colourful imagination that once accompanied me throughout my childhood remains pretty much in-tact and is used probably on a daily basis operating safety from inside a somewhere deep inside my head. It is probably my favourite place to go and spend time, a retreat, often serene and very unique with no boundaries and where nonsense is manufactured and foolish ideas are stored. A place where cows can relax and where colours never fade.